This page provides details about iteration 007 of CyberPi.

Most iterations upgrade the product incrementally while being compatible with earlier versions, so the programs you compile for earlier versions can be used in the latest version.

Understanding the information on this page may require some background knowledge. If you have already purchased the latest version of CyberPi, or are using an earlier version and have no questions about feature updates, you don’t have to read this page.

In 433 band-based field control mode, MakeboX communicates with the power management module on the robot through the 433 band and thus controls the robot and obtains its status information.

The following UI is added on CyberOS. Choose Settings > About CyberPi to find it. After you scan the QR code with your smart phone where the MakeX officiating app is installed, your smart phone, MakeboX, and CyberPi can communicate with each other wirelessly.

With the Wi-Fi-based field control technology and MakeboX, the MakeX officiating app can pause, restart, and monitor the status of robots in competitions, which can be expected in the some of 2022 competitions.

Official release of the Bluetooth Controller extension for CyberPi

The 007 firmware officially supports the Bluetooth Controller extension, and you can use the following blocks to write your programs. 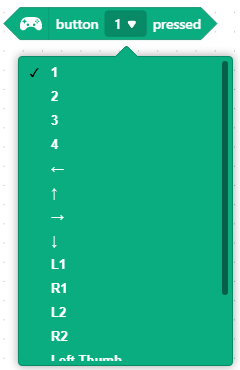 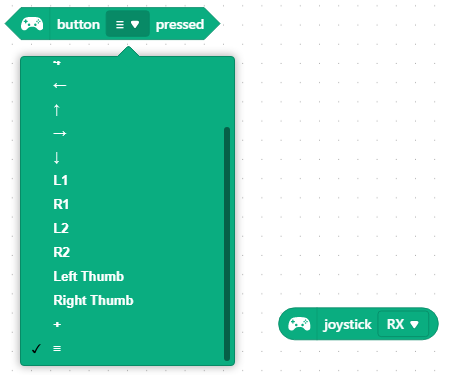 The chassis calibration function is added. With this function, after you change the wheelbase and wheel diameter of mBot2, it still can execute commands, such as turning 90 degrees, accurately through calibration and intelligent turning coefficient setting. In addition, this function, to some extent, resolves the problem of inaccurate turning caused due to improper building of mBot2.

Showing expression with the 8×16 LED matrix

An expression block is added in the 8×16 LED Maxtrix extension for CyberPi. You can use this block to write programs for mBot2, making it a robot with emotions.

Official release of the Network extension

In version 007, bugs reported by users are fixed and the Network extension is officially released. You can use it to teach network communications.

Your feedback and suggestions are welcome, and we will improve the extension accordingly to give full play to the value of CyberPi in education.

In Simple Network mode, CyberPi works as a client (STA) by default and connects to other non-CyberPi devices (e.g. a phone, a server on a LAN). By default, port 5050 is used to implement data communication.

We will soon update the Python 3 library for Cyberpi to support the user cloud message function. Stay tuned to the updates in the Python API Documentation for CyberPi.

Most of the features supported by MicroPython will be supported by Python 3. For example, mBot2 will support Python 3 programming.

Stay tuned to the updates in the Python API Documentation for CyberPi.

In versions earlier than 007, CyberPi automatically connects to the Wi-Fi network it has connected to last time, which affects the ESP32-NOW communication. Therefore, this function is deleted, and you need to connect CyberPi to the Wi-Fi network through the block or API.

The start UI is updated due to the new VI of Makeblock.

Modified the menu hierarchy and items

Increased the function of the HOME button

After pressing HOME to enter CyberOS, you can press HOME again to quickly return to the homepage.

After connecting the enhanced mBot2 Shield to CyberPi, the external battery level is also displayed. You can clearly see the status of both the internal and external batteries.

Added the function for resetting CyberPi

Choose Settings > Reset. When the reset starts, the following UI is displayed:

When the reset is complete, the homepage is displayed.

Resetting CyberPi deletes all the data you’ve uploaded to CyberPi, all the Wi-Fi settings, and the name you set for CyberPi.

Added the items Preset and My programs

After you choose Switch program, you can choose between Preset and My programs.

Program SNs are deleted to give space for program names.

(You can pull the joystick to left or right to switch between preset programs and user-defined programs.)

The Preset programs include several default programs. Names are given to help users understand the functions of the programs.

My programs are programs uploaded by users. Names you set for the programs on mBlock 5 are displayed.

Logic of overriding in program uploading

When a preset program is being executed, a program you upload replaces Program1 in My programs.

Improved the motion performance of mBot2

The user-defined color option is added.