How much load can CyberPi working in combination with Pocket Shield bear?

FAQs on the LAN communication of CyberPi

1. What is the working principle of LAN communication?

LAN commnunication between CyberPis is implemented based on the ESP-NOW protocol pf ESP32. Messages can be transmitted through Wi-Fi without Wi-Fi connection. The transmission, however, is not reliable. The data broadcast may fail to be received by the target device due to any one of the possible causes, such as that the LAN has not been started properly and the target device uses another Wi-Fi channel.

CyberPis on the same LAN can communicate with each other without Internet access. The communication is implemented in one-to-multiple mode. Generally, one CyberPi can broadcast data to any number of other CyberPis.

2. My two CyberPis fail to communicate with each other by broadcasting messages on the LAN, why?

In the following scenarios, the two CyberPis fail to communicate with each other because they use different Wi-Fi channels:

CyberPi 1 is connected to router A, and CyberPi 2 is not (due to empty connection setting, incorrect password input, or out of connection range). If the channel used by router A is different from the deafult one (channel 6) of CyberPi, CyberPis 1 and 2 use different Wi-Fi channels and therefore can’t communicate with each other.

3. How do I ensure that two or more CyberPis properly communicate with each other by broadcasting messages on the LAN?

CyberPis can communicate with each other properly by broadcasting messages on the LAN as long as they use the same Wi-Fi channel.

You can ensure two or more CyberPis use the same Wi-Fi channel in either of the following ways:

FAQs on the chassis and encoder motors

1. Turning errors occur when I control my mBot2, why?

mBot2 is assembled with multiple parts, including metal and plastic structural parts, of which the tolerance can’t be completely eliminated due to industrial limitations. Besides, a tolerance is allowed on the assembly of mBot2. All these tolerances may cause turning errors on the chassis of mBot2. This turning error, however, is quite stable and can be rectified by using a turning coefficient.

The following figure shows the program for rectifying the error:

2. How do I use the blocks for calibrating the chassis of mBot2?

When the gyro-based motor calibration (turning 720°) block is executed, CyberPi lights up its LEDs and turns off the LEDs after mBot2 has turned 720° and the value output of the gyro is stable. The calibration coefficient obtained is stored on CyberPi and is not deleted after CyberPi is powered off.

3. The accumulative error is large after an encoder motor runs multiple times, why?

This is what it is supposed to be. A certain error occurs every time the encoder motor runs, and the error is accumulative after mBot2 runs multiple times. For example, the error is large if the following blocks are executed:

We are making efforts to improve the motion of mBot2, and a new firmware version is expected to be released by the end of July to rectify the accumulative error.

FAQs on the quad RGB sensor

1. How are the line, background, and colors defined for the quad RGB sensor?

the quad RGB sensor needs to learn the line and background first.

The quad RGB sensor can recognize colors while identifying a line and background.

For example, when identifying the black line on a white background, the quad RGB sensor can also recognize the colors on the line.

With the quad RGB sensor, mBot2 can recognize colors while following a line.

The following is an example program. 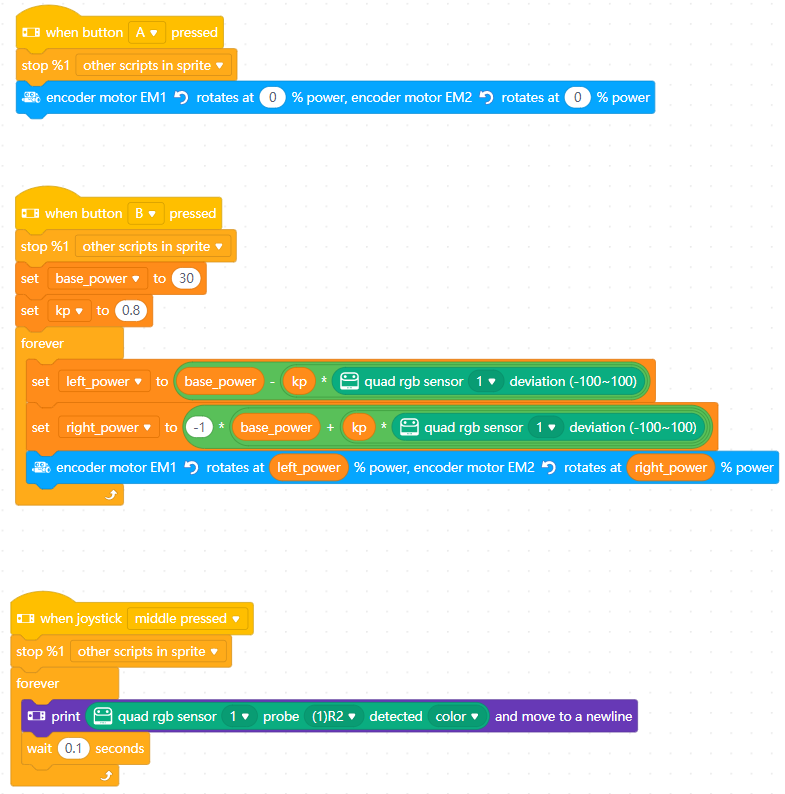 After you press button A, mBot2 stops moving.

After you press button B, mBot2 starts to follow a line.

After you press in the middle of the joystick, the name of the detected color is diplayed on the screen of CyberPi.

How to change program names in CyberPi?

Change program names in mBlock through your PC.

For example, steps to change the name of the third program in My Programs are as below: 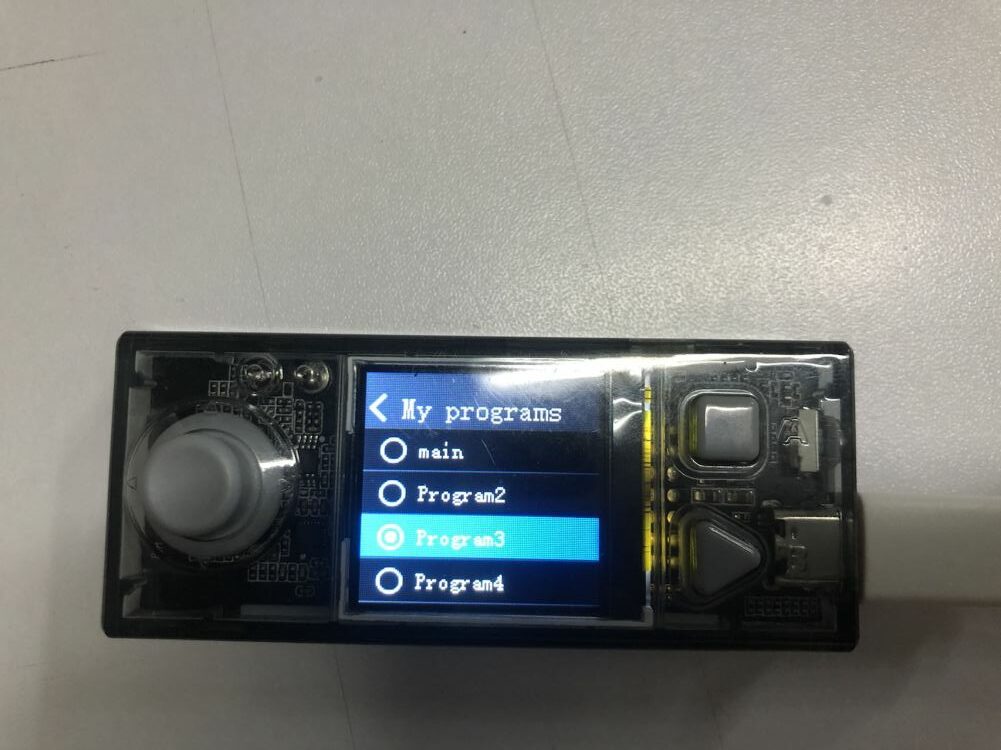 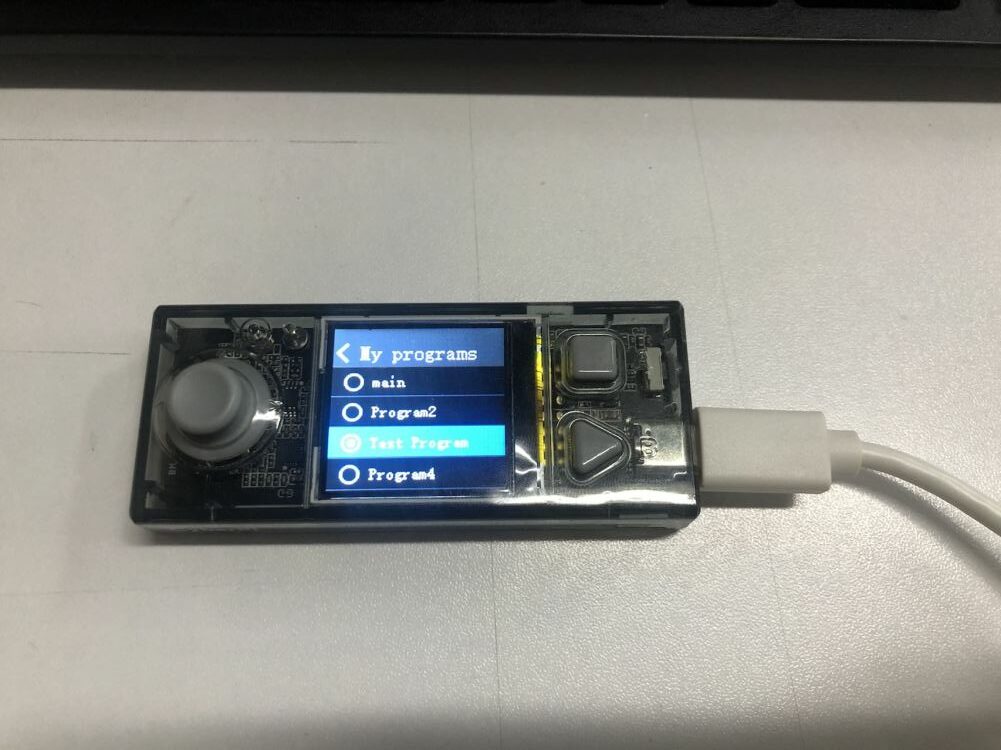