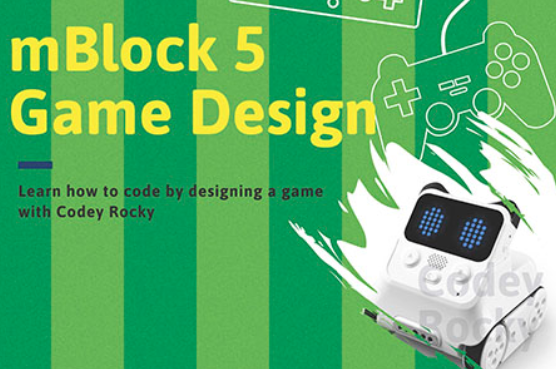 In the Game Design Courses, students will learn how to design games using the block-based programming tool (mBlock 5) and Codey. Through designing games, children will be able to have a better understanding of how the sensors of Codey work and know how to apply graphical programming skills in different scenarios.

“Don’t just buy a new video game, make one!” That’s exactly what Obama, the former president of US, said. In today’s world, “Game” is no longer a touchy topic. Instead, everyone is talking about games, playing games and teaming up with other players in games. Games are everywhere: in the streets, in the eyes and minds of the young and the old. The number of people who study games or work as game designers is growing as well. Even educationalists begin to take games as a research subject. They want to figure out whether games can help improve the performances of students in learning. They even proposed a new concept, Game-based Learning. Game-based learning, as the name suggests, is an approach that encourages students to develop learning skills by playing games.

Game design is essentially a process of developing software. Designers have to think about how to create a game that is appealing and elegant. It’s not an easy job. In some universities such as the University of South California, University of Utah, Carnegie Mellon University, students can major in Game Design, preparing themselves for working as a game designer in the future. And in this series of Game Design Courses by Makeblock, Codey Rocky and mBlock 5 are used as tools to help students learn to code and, of course, learn how to design games.

The goal of this guide is to help students develop the skills to create a game from scratch on their own.

I. The Definition of Games

The first part will introduce the definition and the elements of games. In the second part, we will talk about the four cornerstones of game design. The third part is about the process of how to design a game. As for the fourth part, it will give an overview of the Game Design Courses by Makeblock and a learning roadmap.

I. Definition of Games

Games have different definitions. Anna Anthropy, in her book The Rise of the Videogame Zinester, defines games as “an experience created by rules”. Tracy Fullerton, in the book Game Design Workshop, believes games are an interactive experience and an approach to social communication. Generally speaking, all the definitions of games are about “rules” “interaction” and “art”. Rules are an integral part of games. They influence how players play the games and how players feel about the games. And it can be fairly said that game is an art form because games need to be visually elegant so as to engage players. At the same time, games are also a way of communication. Single-player games are about the interaction between players and games, and multiplayer games are more about the interaction among players.

In the Courses, the sample games can be categorized as computer games. We’ll need to use computers, Codey and other electronic components when designing games.

Mechanics refers to the procedures and rules of games; Story refers to the sequence of events in games; Aesthetics refers to how your game looks, sounds, smells, tastes and feels; Technology refers to any materials and interactions that make your game possible. All the four elements are essential to games. None of them are more important than the others. Therefore, we need to keep one thing in mind: a good game should include the four elements although in some cases designers can choose to amplify one specific element. 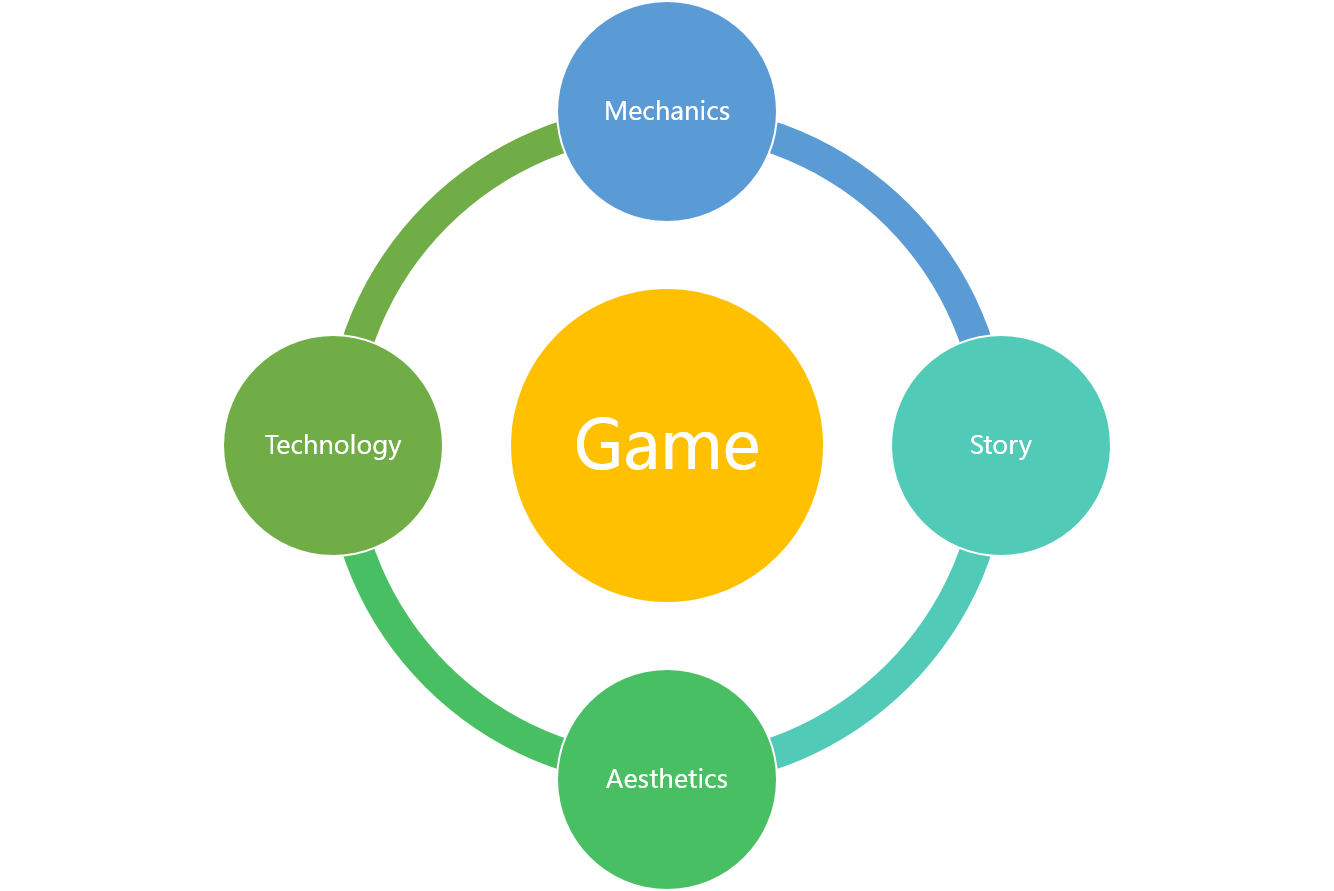 Mechanics: Mechanics refers to the procedures and rules of games. It describes the goal of your game and defines how players can accomplish the goal. Also, mechanics determines what will happen when players are trying to win the game.Take the game Dou Di Zhu as an example here:Goal of the game: Win the game as a team (Landlord VS Peasants). The player who is the first one to have all the cards discarded wins the game or the team wins the game.Procedures: Three players take turns playing their cards. The game has a rule that determines who wins the game. And it also has a set of rules that define how players discard their cards.

Story: Story refers to the sequence of events in games. It might be linear and pre-scripted or branching and emergent. Again, we take the game Dou Di Zhu as an example. The story of the game Dou Di Zhu is about two peasants working together to fight against the landlord. If peasants win the game, they share the scores; if they lose the game, both of them will have to take the consequence.

Aesthetics: Aesthetics determines how your game looks, sounds, smells, tastes and feels. It’s essential to game design because it has the most direct impact on the player’s experience. In the game Dou Di Zhu, the background music and the voice recordings of real persons prove to make the game more appealing.

Technology: Technology refers to any materials and interactions that make your game possible. The roles that technology plays in games vary from game types. For instance, for body games,  technology plays a small part. But since we are going to learn how to design computer games using mBlock 5, technology is a must. Technology here includes two aspects: 1) mBlock 5  2) the sensors of Codey Rocky.

When designers create games, they need to consider the four elements. Therefore,  in the Game Design Courses, you will learn how to make your characters and backgrounds look better, how to make the game mechanics well orchestrated, as well as how to give your game story plots. And the focus of the Courses is clear: help teachers and students turn their game concepts (aesthetics, story and mechanics) into reality by using mBlock 5 (technology).

The game design process can be divided into four steps: Brainstorming, Prototyping(physical and digital), Playtesting, Iterate and complement. Following the steps, teachers and students are able to create games using the block-based programming language(mBlock 5. 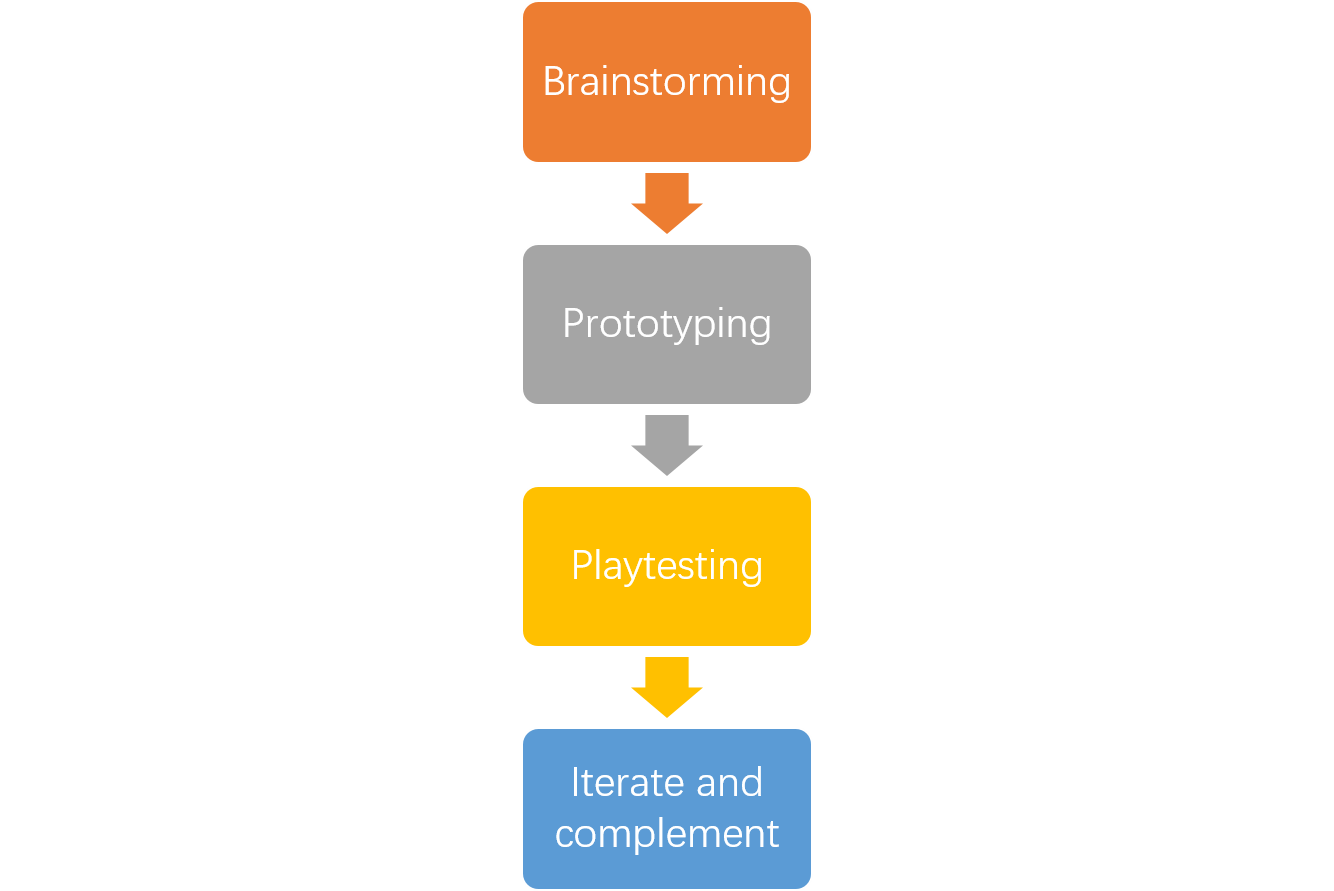 The teacher can put forward some problems related to game design, encouraging students to figure out the solutions. Or the teacher can present students a design concept, and then have students work to materialize the concept.

Firstly, expose prototypes to target players for testing and get feedback from them. Secondly, designers need to observe whether bugs will occur when players are playing the games. Keep a record of the bugs for later iteration.

Iterate the game based on the feedback and implement the game. 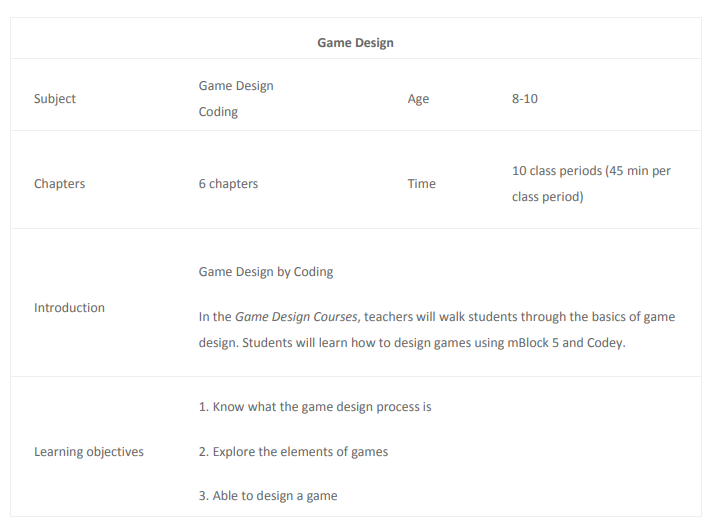 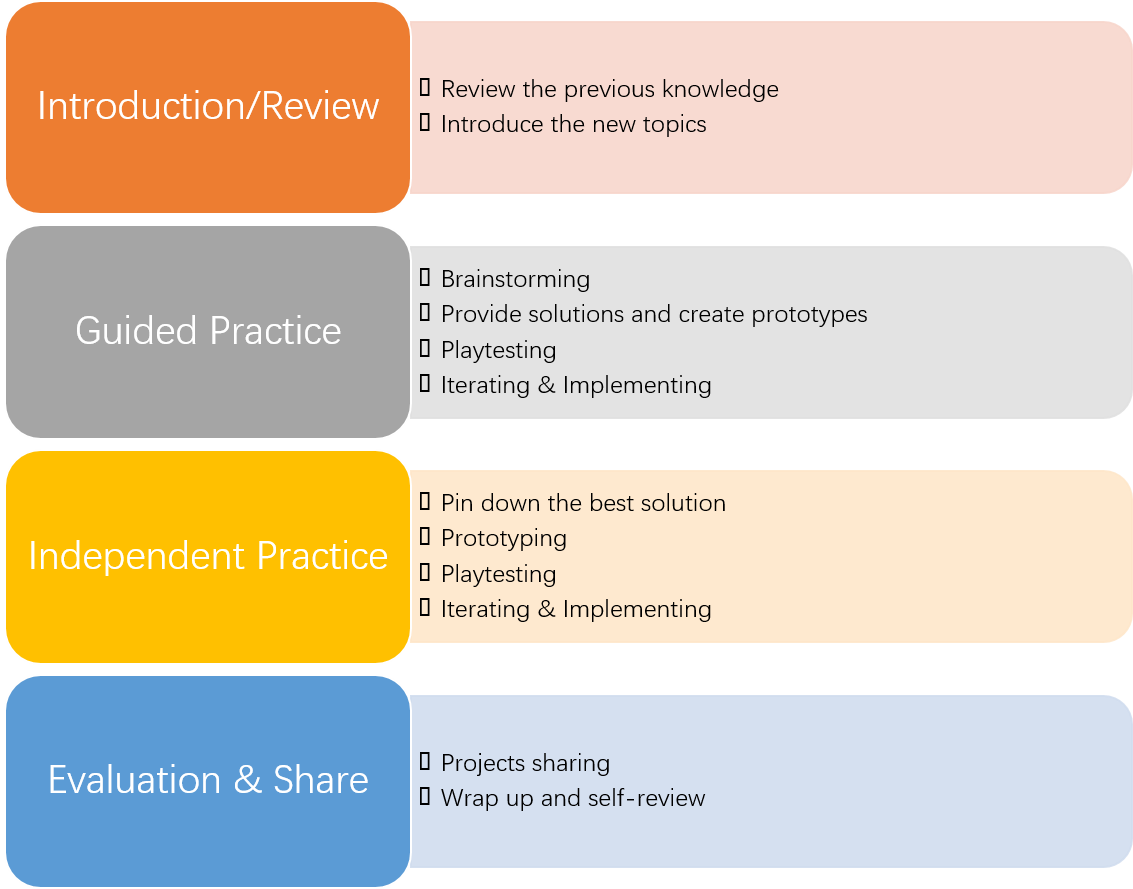