What is STEAM Education?

How to Teach STEAM Education in the Classroom

How Do You Teach Your Kids to Code? Here Are All the Resources You Might Need

Sign up for email updates with the latest information on Makeblock educational solutions,case studies,and other information to help you bring your classroom into the 21st century.

In order to enhance students’ programming interest, Makeblock has perfected the Scratch source code and added a lot of playability, which brings students from the virtual world of computers into the real world of physics. In addition, mBlock 5 includes multiple design programming courses based on the American CSTA curriculum standard design. The Scratch course is based on knowledge points, academic year, student level, and difficulty level, which brings tailored programming education solutions to both teachers and students. The mobile app can guide students through all the introductory processes, and the gamification course helps make kids more interested in learning.

In August 2018, the Scratch team released the new Scratch 3.0 program. Scratch 3.0 supports running programs on a variety of devices, including tablets. The new version will include new images, new support materials, and new programming capabilities. The value of Scratch 3.0 is that it expands how children create and share, and further helps educators support students.

Before you start Scratch 3.0 , here is how to prepare to use it.

While using Scratch 3.0 , you will have more ways to create and share. Unlike the old version, now you can use a tablet to create and share a project by choosing from dozens of new characters, backdrops, and sounds. Additionally, this version will provide new in-editor experience in many different languages for first-time users. With all of the new features Scratch 3.0 provides, you can continue to use the existing programming blocks in your projects and accounts. (The offline versions of Scratch 1.4 and Scratch 2.0   will still be available.)

There are five new features for you to learn in Scratch 3.0:

Scratch 3.0 now lets you use a scroll bar to help you to organize your screen if there is so much code that the script area gets too crowded. That way you do not need to worry about running out of space, because you can arrange your code better by using the scroll bar.

If you run Scratch 3.0 on a tablet, bigger blocks will be more accessible for you to select and drag. The bigger blocks also make it easier to work on desktop computers as well.

The sprite icon in Scratch 2.0 is hard to find and use. You have to press the i to see or change the name, features, or information. However, in the new version of Scratch 3.0  , all the information, such as size, location, and direction, is shown below the stage.

In Scratch 2.0, you have to click on the sprite to see the costume details. Now, with the new version, you only need to move your mouse on top of the Choose a Sprite icon and click the magnifying glass. The new version will show you various costumes instead of just a number.

Overall, Scratch is an excellent programming tool. The new Scratch 3.0 provides users with a more convenient way to operate. In the future, Scratch will undoubtedly become more and more popular in the field of programming education.

…..Click here to see more stories about Makeblock and You 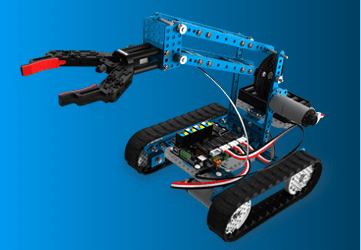